I love the title of Shauna’s book. How can you not want to read something called Werewolves in the Kitchen?

When Ellie moved to the SpiralStone retreat center to figure out her life, she expected peace, quiet, and spiritual practice. She had no idea that the two sexy men running the kitchen would seduce her…much less at the same time. Kyle and Jake turn out to be wilder than they seem and Ellie finds herself wrapped up in devastating magic. She must choose: stay with Jake and Kyle and risk who she has been, accepting the dangerous world of shapeshifters? Or leave them and risk madness, or worse?

Jake turned the shower on while Kyle kissed her senseless. Ellie threaded her fingers into Kyle’s short blond curls, and suddenly Jake was behind her, untying her shorts. Kyle drew her top up, and she could feel Jake’s bare chest against her back.

She was just in her bra and panties when Kyle released her to pop the button on his jeans. Then he kissed her again, nipping his way down her body.

Jake made an appreciative noise from behind her, and she turned her head. He kissed her, grinding his hips against her buttocks. Distracted by Jake kissing her, she gasped when Kyle brushed his fingers over her mound, rubbing her through her panties. He nipped at her hip, and she felt him dragging her underwear down. She tugged him up and kissed him.

Kyle grinned, placing her hands on the waistband of his jeans to tug them off. Her jaw dropped just a little as his length sprung out. “Oh my,” she whispered.

He drew her to him and into the steaming shower, kissing her. Jake closed the glass shower door behind him; it was just big enough for three. She took them both in before they drew closer.

Jake tipped her head back into the water to wet it before he began lathering up her hair, his fingers massaging her scalp as she blissed out.

Kyle grabbed a washcloth and washed her from shoulders to feet until she shivered. Ellie blushed and protested when his fingers slipped between her folds until she moaned. Jake claimed her lips as Kyle began to circle her pearl where she was slick with arousal. “So wet, baby.”

Jake slid his hands over her body, down to her buttocks, lathering up her back with body wash as Kyle drove two fingers into her pussy.

She cried out into Jake’s mouth at the sensation. She’d never been kissed like this before—the hot water falling on them, Jake’s tongue lapping at her lips even as Kyle was pleasuring her where she’d been swollen and hot for them for so long.

Ellie moaned, thrusting down onto Kyle’s fingers. How many times had she blushed, fantasizing about them doing this to her? She was already on the edge of orgasm from the thrill of having them both totally focused on her pleasure and so many days without release.

Kyle circling her pearl had her gasping for breath against Jake’s lips. “That’s it,” he murmured, stroking in and out.

Their touches finally drove her over the edge. Ellie cried out, bucking, and they had to hold her up as her knees gave. Jake kissed her, and then Kyle kissed her, and she threaded her fingers through both their hair while they murmured sweet things, petting her.

“Feel a little better?” Kyle asked, and she blushed.

“I’ll take that as a yes,” Jake grinned.

She panted, knowing the two of them were not done with her yet. 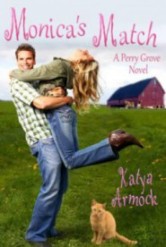