Undercover Kitty by Edie Hart is a quick, fun read. Cory goes undercover at a strip club as a waitress to discover who killed her sister and several other women who work at the club. Jason, a former cop, is posing as a bartender to do the same as a favor to his cousin, who owns the club. The two have immediate attraction, but neither tells the other they are undercover at the beginning.

Ms. Hart’s style is very crisp, which makes this a quick read that I finished in one sitting. The only downside the the snappy pace is that the relationship development felt rushed. I would have liked to see a bit more meaningful interaction between Cory and Jason and not the overarching focus on physical attraction.

Overall, this was an entertaining read with interesting characters, a good mystery that wasn’t too obvious to solve, and some spicy sex scenes along the way. I give this book four cat kisses. 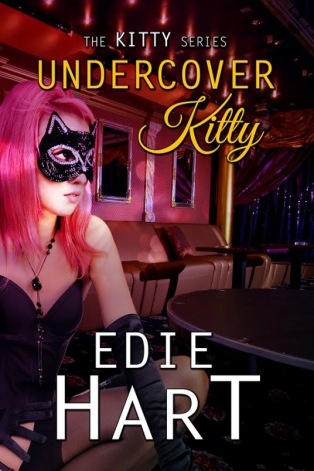 Cory West is determined to find out who killed her sister, even if that means dressing as a sexy kitty and working at a strip club. Will the sexy bartender distract her from finding the killer before it’s too late?

The bar would be closing soon, not soon enough for Cory. She loved her boots, but her feet were killing her. She worried her feet would go on strike if she had to wear the pinching things much longer. She hadn’t taken a break all night and the small of her back was twinging.

After doing a quick check of her tables, she headed for the back door and a breath of fresh air. She glanced over at the DJ booth. Music was pounding throughout the club, but the DJ was nowhere to be found. That was strange. Where could he be? Cory passed the booth and made her way to the door.

After pausing by the ladies room while a customer pushed open the door and entered, Cory noticed the DJ making his way to the back. He made a beeline for the women’s dressing room, glanced around and darted inside. Curiosity told her to move her ass. There was a murderer loose and it could be him.

She waited a few seconds and then started to make her way to where he’d disappeared. Before she could get to the doorway, the sexy bartender came around the corner from the direction of the bar. He glanced at the dressing room and then at her. There went her chance to figure out what the DJ was up to. Cory stopped where she was. The bartender made his way over to her. He was tall in the dark hallway. She backed up a few steps until she felt the wall behind her.

The sexy man continued to invade her space and leaned one arm against the wall next to her head.

“Hey,” he said. In the darkness, she couldn’t see what color his eyes were.

She glanced over toward the dressing room and he leaned in closer. She caught the light scent of outdoors and mint and her stomach flip flopped.

“You must be Cory,” he said close to her ear, his warm breath blew her pink wig hair slightly.

“Uh, yeah. And you are?” She tried to keep an eye on the dressing room door to see who was in there with the DJ.

“Jason.” He leaned in closer until they were almost chest to chest.

Her heart pounded hard and her legs began to quiver. There shall be no hooking up, Cory. Must find killer. Then maybe a hook up.

She licked her lips and tried to focus.

From the doorway came the sound of approaching footsteps. She tried to move around Jason to see who was coming, but he leaned in and pressed his lips against hers.

The moment their mouths touched, Cory was lost. Flames pooled in the bottom of her stomach and lower.

Edie Hart was born in the Northwest suburbs of Chicago, where she now resides with her husband, two children, dog, and three cats. After spending her childhood making up stories in her head, she finally decided to put them on paper. What came of it was her first novella, One Bad Day. Edie is a die-hard romantic and believes that everyone deserves to be loved unconditionally—both in print and real life.

Edie also admits that “Edie Hart” is a pen name and an alter ego to an otherwise boring wife and mother. Edie is 20 pounds lighter, loves to skydive, travels to foreign places, and is a total sex kitten as compared to the uninteresting other half who is none of those things.

In reality the counterpart of Edie is a lackluster 40-something-year-old, whose main goal is to keep Bacon Boy from torturing Gator Girl. Last week he left ravioli handprints on the back of her white T-shirt. The week before that he told her she was adopted and she believed him.