A Jinn’s Seduction: Spanish Nights is a story about a Jinn, Armand, who was cursed by a genie to live in a small area of Spain and also stripped of his powers. When writer Kayla decides she needs some new scenery after being blocked since her divorce a few years earlier, she takes up her friend’s offer of a house in a secluded Spanish village.

There is nice chemistry between Armand and Kayla, and the story is well-paced. Occasionally it seemed that the dialogue or interior monologue didn’t fit the characters. For instance, Armand would think or say something using American slang. As for Kayla, her interior dialogue switched from serious to flippant so fast a few times my head hurt. These moments weren’t all that frequent, but pulled me right out of the story every time.

There were also a few contradictions in the details (for instance, at the beginning it has Armand being cursed in 1100 AD. Later it says he’s been cursed more than a thousand years. So this book takes place in the future?) This was marked as a review copy, so it’s possible that these inconsistencies have been edited out in a final version.

Overall, I found this to be an entertaining read. I loved Armand’s brother, Crone (he’s going to get a book, right?). There are some nice twists and turns in Armand and Kayla getting to their happy ending that I won’t spoil. This is the first book I’ve read by this author, and I’d be interested in checking out more of her work. I give this book 3.5 cat kisses.

After a bitter divorce from her cheating husband, Makayla searches for her muse in the remote hills of Spain. When she flings open the door of her villa, she finds it in the form of intense blue eyes and a killer body attached to a thick Spanish accent.

Armand has lost everything. His magic and his freedom are taken when an evil curse is placed on the Jinn, bounding him to earth. With only his immortality and ability for seduction, he sets his sights on the dark haired newcomer in town.<

What begins as desire in the steamy nights of Spain, quickly leads to something more meaningful. However, when evil emerges from the shadows, Makayla learns she must choose between her mortality and Armand’s freedom. 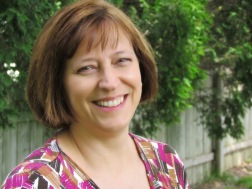 As a child, Valerie would often get into trouble for peeking at her mother’s favorite TV show, Dark Shadows. She can still hear her mother saying “It will give you nightmares.” She was right of course, but that did not stop Valerie from watching. As an adult, her love of the fanged creatures never waned. She would watch any vampire movie she could find.

Being a true romantic, Valerie was thrilled when she discovered the genre of paranormal romance. Her first read was one of Lara Adrian’s, Midnight Breed Series and from there she was hooked.

Today, Valerie has decided to take her darker, sensual side and put it to paper. When she is not busy creating a world full of steamy, hot men and strong, seductive women, she juggles her time between a full-time job, hubby and her two German shepherd dogs, in Northern IL.

2 thoughts on “Review: A Jinn’s Seduction starts a promising series”