I’ve mentioned Cynthia Sax’s Sinful Rewards series before on my blog, and now book 4 has been released, with 5 and 6 coming up later this year. Now might be the time to get started on the series if you haven’t yet.

Belinda “Bee” Carter is a good girl; at least, that’s what she tells herself. And a good girl deserves a nice guy—just like the gorgeous and moody billionaire Nicolas Rainer. He is everything she wants in a man.

Or so she thinks, until she takes a look through her telescope and sees a naked, tattooed man on the balcony across the courtyard. Hawke is mysterious, the bad boy she knows will bring only heartbreak. He has been watching her, and that makes him all the more enticing.

But when a mysterious and anonymous text message dares her to do something bad, she must decide if she is really the good girl she has always claimed to be, or if she’s willing to risk everything for her secret fantasy of being watched.<

Is her mystery man the reclusive billionaire with a wild side or the darkly dangerous bad boy? 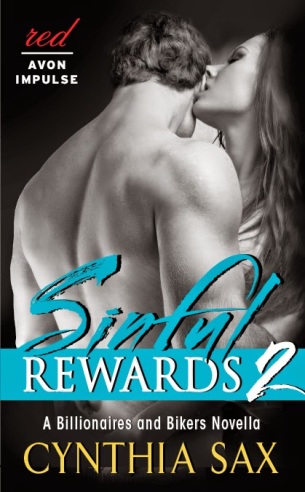 As the stakes are raised again, will Bee succumb to the sensual allure of this latest dare?

Bee Carter’s carefully constructed world is tumbling down around her designer knockoff heels. Pleasing others isn’t working for this small-town fashionista. Bee decides to throw caution to the Chicago wind for one night and release her inner bad girl, accepting a sexy challenge from an unknown texter, exploring the backseat of a limousine with gorgeous billionaire Nicolas, and entering a rough, tough biker bar with the mysterious Hawke.

Four years ago, Bee Carter left her tiny hometown, escaping her tormenters. She concealed her tarnished reputation under a good-girl persona, hiding her history from Nicolas, her strong and silent billionaire; Hawke, her tattooed bad-boy biker; and Cyndi, her man-crazy best friend.

Today, she’s returning home … and she’s not alone. Some of her deepest, darkest secrets will be revealed. Trust will be tested. Clothing and inhibitions will be discarded. Bee and her hometown will never be the same.

When her past and her present collide, will any of Bee’s relationships survive?

Author of over 65 books, Cynthia Sax is a brilliant writer who can make you care about a demon or an alien just as much as she could for a human. Her heroes may not always say, “I love you”, but they will do anything for the women they love, and they love the same woman forever.

Cynthia Sax lives in a world where demons aren’t all bad, angels aren’t all good, and magic happens every single day. Although her heroes may not always say, “I love you”, they will do anything for the women they love. They live passionately. They fight fiercely. They love the same women forever.

Cynthia has loved the same wonderful man forever. Her supportive hubby offers himself up to the joys and pains of research, while they travel the world together, meeting fascinating people and finding inspiration in exotic places such as Istanbul, Bali, and Chicago.