Since these three short novellas are all interrelated, I’m going to do my written review of them as a whole. Given that they are written by three different people, I will also rank each book.

The trilogy follows three best friends who own a martini bar named With a Twist. They’ve been tasked by a gypsy to find love by midnight on Valentine’s Day or lose all the success they’ve gained with their bar. Each book focuses on one of the friends.

First up is Jasmine, who has long lusted after artist Jake, but he’s never seemed to be interested in more than a friendship. However, a long sojourn in Italy makes the heart grow fonder and he returns to win Jasmine’s heart. This story was not my favorite, basically because I didn’t enjoy Ms. Fox’s writing style as much as the other two authors. There was a lot of back story at the beginning that didn’t hold my interest. As the first of the trilogy, she did perhaps have more set up to do, but it still felt longer than it needed to be before we got to the action. Once we did, the action is mostly hot sex (this was probably the steamiest of the trio) and then Jake getting stuck in a snowstorm that threatens that he won’t make it back by Valentine’s Day so Jasmine can confess her love in person. This was perhaps the thinnest premise of the three books to build tension. If faced with losing my business due to a gypsy prediction, I would’ve just spilled the beans on the phone.

Second comes Daisy, who has been drifting along in life. There’s a little confusion about who is really the man for her, as she has two pursuers (and some other complications which you can read the story to find out 🙂 ). I liked this story the most, as both the hero and heroine had compelling emotional and circumstantial issues to deal with. They seemed to fit together really well and had the most chemistry. There were some spicy sex scenes in this book too.

Third comes Rose, who has pined after Jasmine’s cousin Max since high school. He’s been globetrotting since then, and she hasn’t seen him in a decade. So when he shows up to visit Jasmine, she arranges an excuse for him to stay at Rose’s place. This was the tamest of the books, sex-scene wise, but there were more sweet moments between the two as they work out their past, present, and future.

Overall, this was a pretty enjoyable trilogy. There are a number of typos (especially in Ms. Quinn’s book), but not so many that it was terribly distracting. There were a few small continuity errors, although this is mainly because we see a few moments appear in different books, so therefore from a different woman’s POV. This actually was a nice touch for the most part. I only found one error that couldn’t be waved away with this reason, and that’s in Ms. Quinn’s book when Daisy says she was a transplant to San Diego in high school, whereas the other books say the three woman met in elementary school. (Unless maybe they are all transplants, but there is nothing to suggest that’s the case and a few details that make it seem not the case.) 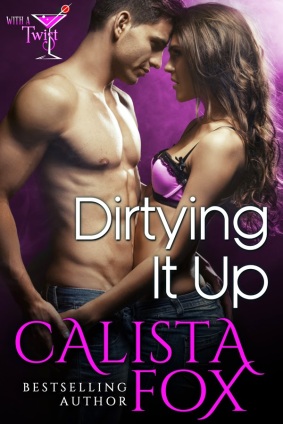 A prophecy whispered in Jasmine Rosso’s ear by a gypsy fortuneteller in San Diego’s Seaport Village leads her to a sizzling night with sexy blown-glass artist Jake Hartnett. But the clock’s running out on the time allotted to fulfill the prophecy, and if Jasmine doesn’t make a true love connection with Jake before midnight on Valentine’s Day, she’ll lose everything she’s worked so hard to achieve this past year…including the trendy martini bar and bistro, With a Twist, that she owns with her two best friends.

Worst of all, she’ll lose Jake—the only man she’s ever wanted.

Fate may have served up the wrong man, but for Daisy L’Amore, love comes with a twist.
Daisy L’Amore is faced with impossible choices. A prophecy given a year ago has Daisy and her two best friends racing the clock to find love before midnight on Valentine’s Day or they will lose everything they’ve worked for, including With a Twist, the martini bar and bistro the three of them own. A crystal heart and a gypsy’s words guide them, but love has a way of making its own rules, and Daisy is afraid to break them.

Romeo Corazón is shaking up Daisy’s world, but will the transformation he brings to her life be the downfall of everything she values? Or will falling in love with the wrong man make everything right?

When a gypsy’s prediction begins to come true, Rose Cupido dismisses it as a coincidence, but when a past estranged boyfriend shows up reminding her of the love she once felt for him, Rose can’t help wondering if that gypsy had true magical powers.

The Three Fates of Ryan Love is the second in Erin Quinn’s series about the Beyond. When a mysterious woman shows up outside Ryan’s bar with a warning that he’s about to die in an explosion if he doesn’t flee with her, he ends up running despite his doubts. As the two navigate their attraction for each other and the fate that faces them, they must decide how much to trust each other.

This book has a unique paranormal world filled with demons, goddesses, reapers, seers and more. Despite reading this book prior to reading the first book (The Five Deaths of Roxanne Love) in the series, I was able to fill in the gaps enough to follow the story and understand the world. The attraction between Ryan and Sabelle sizzles and the sex scenes are well-written to move the story forward and not just tantalize.

The story felt a little unbalanced to me. The first half spent a lot more time focused on Ryan and Sabelle’s growing relationship, but I didn’t feel like that much actually happened. There was a lot of soul searching and back story, and I just didn’t feel all that engaged by the looming danger in the story (as I did in the first book, which I went back and read directly after finishing this one). This could have been partly due to not having read the first book and therefore not having as complete a view of the world. The action in the last half of the book kept me riveted, though. I also thought that the “three fates” in this book weren’t as integral to the plot as the “five deaths” were in book one.

An oracle unexpectedly transforms her destiny when she alters the fate of the man she loves in this thrilling second novel from award-winning romance author Erin Quinn’s captivating new series.

Will love be their salvation . . .

When Ryan Love discovers the mysterious Sabelle alone and terrified in his parking lot, he has no idea that helping the beautiful woman will be tempting fate. She says she’s an oracle from the Beyond, which seems crazy. But within moments of meeting her, Ryan’s entire life goes up in flames. He doesn’t know what to believe, but one thing is clear—now both their lives are in danger.

For years, Sabelle has guided Ryan’s fate. But by breaking the rules to save his life, she sets off a chain reaction with deadly consequences.  Now she’s hunted by her enemy, her future and her heart in Ryan’s hands. In the dangerous race to restore order, Ryan discovers he cannot live without Sabelle, his seductive and devoted prophet. But can he protect her from the dark forces closing in—or will he die trying?

New York Times bestselling author Erin Quinn writes dark paranormal romance for the thinking reader. Her books have been called “riveting,” “brilliantly plotted” and “beautifully written” and have won, placed or showed in numerous awards. Go to www.erinquinnbooks.com for more information.  Look for The Three Fates of Ryan Love in January 2015 from Pocket Books.